Reduction of the risk factors for heart disease is extremely important. Doctors spend an enormous amount of time counseling their patients on just this. But the holy grail of cardiovascular research is an approach that will directly reduce heart attacks, strokes and mortality.

The Transcendental Meditation program is such an approach. In a carefully controlled trial funded by the National Institutes of Health, 201 African Americans with evidence of some artery blockage were randomly assigned to either learn the TM technique or participate in health education classes on diet and exercise. The study’s format was carefully designed so that the two groups received equal time, attention and sense of expectation.

At the end of the 9-year trial period the TM program was associated with a 48% greater reduction in the composite of mortality, nonfatal heart attacks and nonfatal strokes than those who had not learned TM.

While the TM group as a whole had an impressive 48%, reduction, when the researchers analyzed the data further they found that those who practiced the technique most regularly had even more positive results—a 66% greater reduction in heart attacks, strokes and mortality than controls.

This study mirrors several others showing successful reductions in mortality with the practice of the TM technique. 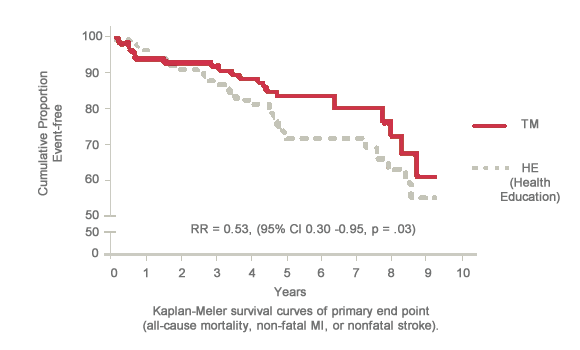 Effects of Transcendental Meditation on Mortality, Myocardial Infarction, and Stroke: A Randomized Controlled Trial in Patients with Coronary Heart Disease 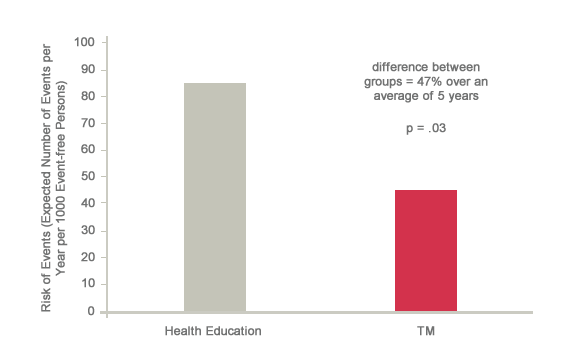