Long-term sleep deprivation affects millions of Americans and there is an abundant and ever growing body of evidence that it contributes to cardiovascular disease. Insomnia is associated with several heart disease risks such as obesity, high blood pressure and atherosclerosis. Over the long term it has been shown to have effect on heart attacks, heart failure and, according to Duke University scientists among others, strokes. Women are known to have more problems with insomnia than men.

For women there is a complex interplay between insomnia and a variety of other health complications. For example, it is widely recognized that calming the mind and managing anxiety can help with sleep. But women have more of a hurdle in this regard as they tend to experience anxiety at about twice the rate of men. There are now also several large studies indicating a strong link between chronic insomnia in women and increased inflammation. Inflammation, in turn, is associated with atherosclerosis and other serious health disorders that can affect sleep.

Attempting to gain control over one of these factors can provide a tool for tackling the others. In this case, reducing anxiety may be key.

The Transcendental Meditation technique allows the mind to settle to quieter levels of thinking and in the process experience the exact opposite of anxiety. Many studies on the TM technique and generalized anxiety have been conducted, most involving a comparison to some alternative treatment. Overall the TM program was more effective. Patients with the highest levels of anxiety, including chronic anxiety, had the best results. 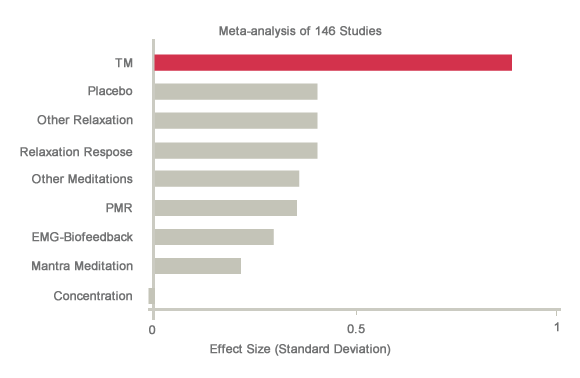 According to a large 2013 Norwegian study published in the journal Circulation there is an association between insomnia and heart failure. The implications for cardiovascular prevention were of interest because insomnia is an easily recognizable and potentially manageable condition. Chronic stress responses seen with insomnia impact the heart due to increased blood pressure and increased release of stress hormones and heart rate. Pain, stress, anxiety and other factors contribute to insomnia. The TM technique reduces these causes of insomnia and therefore contributes to the reduction of insomnia.

Dr James Krag, a Fellow of the American Psychiatric Association and Medical Director of Liberty Point, a residential treatment program, points out that the most frequent causes of insomnia are anxiety and stress. Since the Transcendental Meditation technique helps lessen stress, insomnia will be less of a contributing factor for heart disease.

Dr Sarina Grosswald, Ed.D., is a researcher and an expert in cognitive learning who stated that Americans are the most sleep deprived people in the world. She said that practicing the Transcendental Meditation technique on a regular basis reduces the accumulated stress that could cause this insomnia. Research indicates that regular TM practice improves health, including psychological well-being. In fact, researchers estimate that 70 to 90% of disease is stress related, so if you have a mechanism for reducing stress, it improves your overall health and all aspects of your life.