Cardiovascular disease (CVD) is primarily a disease of the elderly. In the U.S., by age 65, CVD is the major cause of death in women as it is in men.1, 2 In women, the large increase in CVD risk that occurs during and after menopause is not entirely due to declines of sex hormones, because hormone replacement therapy does not remove CVD risk, in some cases only adding to it.3, 4

A more likely candidate for increased postmenopausal risk for CVD and CVD-related mortality is increased stress or increased stress responsiveness.5-10 Increased stress responsiveness after menopause has been observed in both cardiovascular and neuroendocrine systems.9, 11-13 Such stress-related alterations appear to be relevant to the observed differences in hemodynamics, left ventricular structure, and nighttime blood pressure dipping between pre- and postmenopausal women.14, 15 Evidence for a deleterious influence of menopause on fat metabolism also exists.16-18 Increased visceral fat is particularly strongly associated with chronic stress, with CVD, and with risk factors for CVD, including the cluster of risk factors identified as the “metabolic syndrome,”19, 20 including three or more of the following: hyperinsulinemia, hyperglycemia, abdominal obesity, hypertension, and hyperlipidemia.

Excessive levels of the stress-induced hormone, cortisol, may play a role in this increased susceptibility to CVD in older women, and some natural medicine approaches may prevent or reverse this chronic increase of cortisol (see for review21). To explore the possibility that such approaches can reduce cortisol response to stress, we cross-sectionally examined the long-term effects of the Transcendental Meditation program, a component of the traditional system of health care known as Maharishi Consciousness-Based Health Care, previously reported to reduce stress, cortisol, and CVD risk.21

Data from 16 women (mean age = 75 y) who had practiced the Transcendental Meditation program long-term (mean = 23 y) were compared with data from 14 control women, matched for age, who had practiced no systematic program for stress reduction. For comparison, male subjects of the same age (10 Transcendental Meditation subjects and 11 controls) were also studied. Data on demographics, disease symptoms, and psychological variables were collected, and cortisol response to a metabolic stressor (75 g of glucose, administered orally) was examined in saliva and urine. Cortisol was analyzed by radioimmunoassay (Diagnostic Products Corporation, Los Angeles) as previously published,22 with a coefficient of variation of 3.6%. Other measures used standardized test instruments and procedures.

The testing procedure was as follows. Subjects began arriving at 10:30 hours and were asked to urinate in the toilet to empty their bladders. They recorded this time as the starting time for urine collections. Between this time and the end of testing (15:00 hours) all urine generated was collected in a single bottle for each subject, with the last timed urination occurring as close to 15:00 hours as possible. At 11:00 hours, all subjects began salivary collections and filled out questionnaires. Urine and saliva samples were stored frozen until assay. At 12:00 noon, subjects consumed 75 g of glucose in water flavored with the juice of lemon or lime. Blood pressure measurements were conducted throughout the period, with each subject being measured three times at least 15 minutes apart. 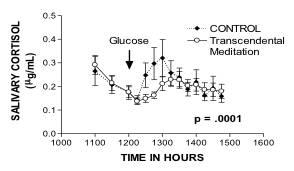 Figure 1. Response of salivary cortisol to oral glucose in postmenopausal women. The statistical comparison is for those points after consumption of glucose, i.e. from 12:15 onward.

Two other correlations were noteworthy. In the Transcendental Meditation group of women, number of months practicing the technique correlated negatively with cortisol excretion (r = -.63, p = .015). Number of months practicing the technique also correlated negatively with the number and severity of symptoms of heart disease, as determined by a nine-item questionnaire (r = -.91; p = 6 x 10-6).

These findings suggest that long-term practice of the Transcendental Meditation program reduces the response of the hypothalamic-pituitary-adrenocortical (HPA) axis to a bolus of glucose in postmenopausal women. Studies in younger subjects, both men and women, also support a normalizing effect of this program on the HPA axis.22-24 The present findings are the first to suggest that a meditation technique can reduce effects of a metabolic stressor on the HPA axis. Because elevated cortisol may be a causal factor in producing metabolic syndrome, the apparent ability of the Transcendental Meditation program to reduce cortisol response to a metabolic stressor may play a role in the preventive effects of this program on CVD and coronary disease.25